The History of Woad 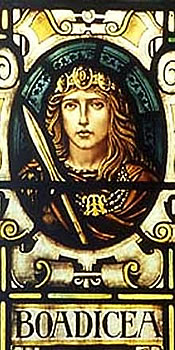 The only source of blue colouring throughout history has been indigo, and woad (Isatis tinctoria) was its source in Europe.

Grown in Europe since the Stone Age it has a long association with East Anglia, notably with Boudicca and the Iceni tribe who used woad to colour their faces before going into battle. Further north the Picts also gained notoriety for their body painting with the blue woad dye. The Romans referred to these Ancient Britons as ‘Picts’ as it is Celtic for “painted”.

It was grown as a field crop and picked in its first year. The leaves were chopped up into a paste by a horse driven mill and then made into balls by hand. These were left to dry in special drying sheds for about four weeks until they became hard like wood.

The dried balls were broken up into a powder, sprinkled with water and allowed to ferment. This was known as couching. When the couched woad was dry, it was packed into barrels ready for the dyer.

The dyer poured hot water onto the couched woad in the vat, added potash or urine. This mixture would ferment for three days before the dyebath was ready, and cloth was wetted before being immersed into the vat.

Woad balls were very valuable and were used for trading. In 1286, foreign woad merchants had a trading agreement with the citizens of Norwich as there had been a dispute over dock charges in London, where they previously traded. During the early 1300s the woad merchants of Amiens were increasing their sales of woad to Norwich because of the expansion of the cloth industry. 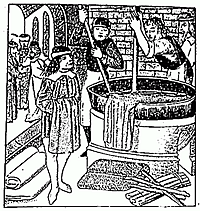 In the mid-1580s woad growing was restricted by the government as grain supplies were beginning to be threatened by woad over-production, which was six times more valuable at that time. Elizabeth I overturned this restriction in 1601 but would not allow any processing near her palaces because of its offensive smell.

Asian indigo from Indigofera tinctoria was grown in the colonies and slowly this replaced the use of woad in indigo dye vats. With the imported indigo from South East Asia and the development of synthetic indigo, (which was cheaper to create), the last woad mill in Lincolnshire closed in 1932.

For more information about the history of woad, we can recommend a very good booklet by John Edmonds entitled “The History of Woad and the Medieval Woad Vat”. It is an enlightening read. We also make woad balls.

Bleu de Pastel de Lectoure
This company is based in France, and specialises in growing woad and extracting pure woad pigment in powder form.

Article: “A Journey into the Blue” by David Hill
Read this article online

Our woad dyes scarves are available from  Jarrold’s shop within The Forum, Norwich, but not the main store. 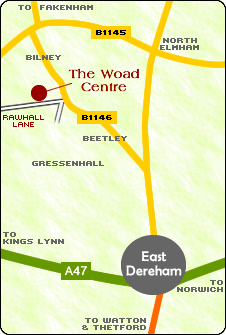